What is a MUD?

MUD – Municipal Utility Districts are the most common form of districts within Texas. A MUD is a political subdivision of the State of Texas created for the purposes of providing water, wastewater, drainage and other services. They are created for areas undergoing residential and commercial development where no utilities exist. MUDs are formed either by a special act of the Legislature, or by the TCEQ. The TCEQ may receive petitions to form MUDs from the owners of large plots of land that desire development. The MUD’s elected board of directors oversees and manages the district’s operations, which include overseeing the design, construction, financing and operation of the district’s utilities.

The primary duties of MUDs include the following:

Fort Bend County Municipal Utility District No. 118 was created by the TNRCC, predecessor to the TCEQ, on August 28, 1998, and operates pursuant to Chapters 49 and 54 of the Texas Water Code. The District contains approximately 620.4 acres of land.

The District is empowered, among other things, to purchase, construct, operate, and maintain all works, improvements, facilities, and plants necessary for the supply of water; the collection, transportation, and treatment of wastewater; and the control and diversion of storm water.

Under certain limited circumstances, and with the approval of the TCEQ, the District also is authorized to construct, develop and maintain park and recreational facilities and to construct roads. In addition, the District is authorized to establish, operate and maintain a fire department, independently or with one or more other conservation and reclamation districts, and provide such facilities and services to the customers of the District. Future recreational facilities may be paid for by the issuance of bonds and the levy of ad valorem taxes in payment thereof. 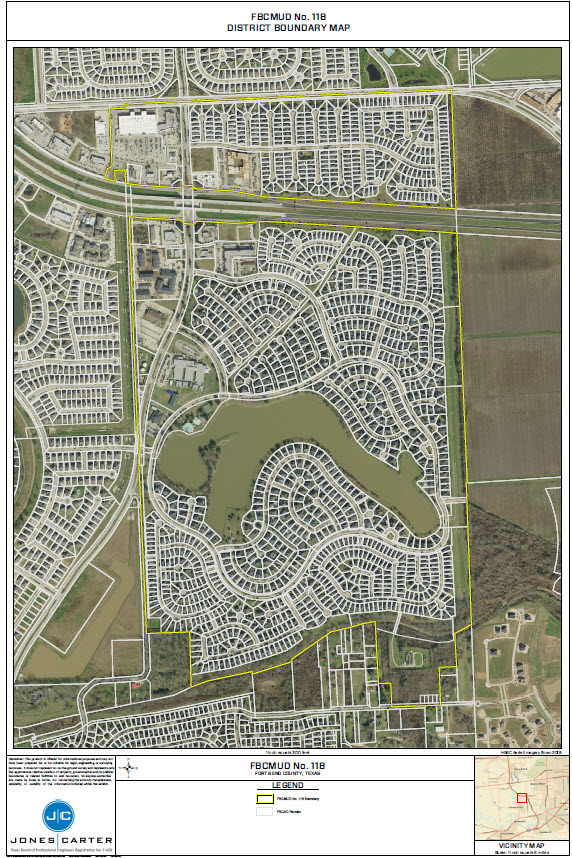 The Board generally meets on the second Tuesday of the month at 2002 West Grand Parkway North, Suite 100, Katy, Texas 77449.

For persons with questions or needing help regarding website accessibility, or to request the provided information in alternative formats, please call (713) 652-6500.